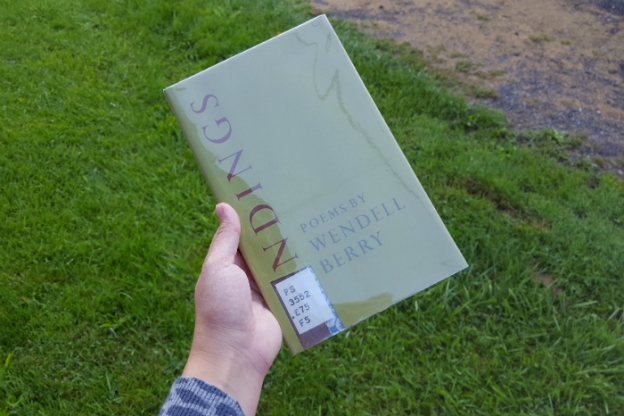 Reviewing Wendell Berry’s first book of poems, The Broken Ground, in The Kenyon Review, Robert Hazel wrote that it “announces the beginning of a career in poetry that probably will be more durable and on a larger scale than that of any other poet of about thirty years I can see coming up the pike.”

Since then Berry has published a second book of poems, Openings, and now Findings, his third, is before you. He has also published two novels, Nathan Coulter and A Place on Earth.

In point of time, the poems in Findings overlap the latter part of his first book and the earlier part of his second, but Findings stands alone as a very important period in Wendell Berry’s career, a career which now gives clear evidence of becoming that of a major American writer. The two long sections which comprise the bulk of Findings have been constructed with great skill and that forceful delineation inherent in directness and simplicity which the voice is fresh and strong and clear. Berry has woven into these two sections, “The House” and “The Handing Down,” a vital sense of family, a rare feeling for the continuity of life through generations and an affirmation of the goodness and rigorousness of life. On an essentially elemental base, in a style that is quiet an assured, he constructs two sequences that are impressive in their range, totality and unity. Three fine elegiac poems complete, and in a sense sum up what goes before.

Findings had not moved from its space on the library shelf until I touched it on Tuesday. I struggled through all 63 pages in an hour before bed that night. Findings, unlike Wendell Berry’s other works, is dark, dipping deeply into themes of death. While reading, Berry’s true voice would shudder through, shine, and fade back into the shroud of pretentiousness… or was it grief?

Usually, I have no issues with understanding the messages Berry is trying to get across to the reader. Yet, while reading this book, I had to stop and reread passages to understand them. Due to reading this way, I had no clear favorites or least favorites of the bunch. To me, all were mysteriously beyond my understanding, so I waded through the words until the very end.

When you begin to think of the book as written in grief, every discontinuous aspect comes together. The odd, stuttering words make sense- they are coming from a mind addled by sorrow. Whomever the old man was, he was clearly of the utmost importance to Berry. His grief is plain in how his stanzas fragment and dance across the page.

There is not much else I have to say about Findings. Even though I struggled with this volume of poetry, I will continue on my Wendell Berry reading journey. I have Openings on loan from the library, and some others I can loan in short order. I am excited to keep reading and learn more about Berry as a person, now that he revealed himself in Findings.

Thank you for visiting my blog, Gathering Swallows. My name is Autumn, and I live in the beautiful Pennsylvania countryside with my dog, Nani. I love to read, write, and craft. I hope you pour yourself a cup of tea and stay awhile. ☀️